Going Back to Cali

Share All sharing options for: Going Back to Cali 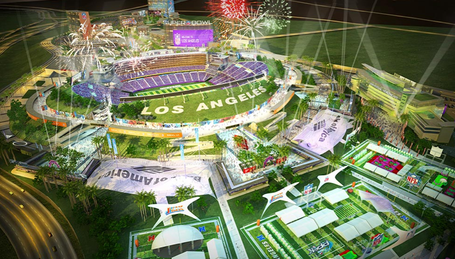 It's always boggled my mind that the Southern California is home to two NBA teams (Lakers & Clippers), two MLB teams (Dodgers & Angels), two NHL teams (Ducks & Kings) and zero NFL teams. Technically, it's been argued that USC is LA's "pro" team, but the worse the Trojans do, the more the NFL talk starts up. Although it's been years since the NFL had a team in Cali, it looks like things might soon be changing.

By a 22-14 margin, a bill to exempt a proposed NFL stadium in Industry from state environmental law earned approval Wednesday in the California state Senate....The bill, sought aggressively by billionaire Ed Roski Jr. and his Majestic Realty Co. in September, would grant the 75,000-seat stadium project an exemption from the California Environmental Quality Act, the environmental law that governs development. To take effect, the plan must be signed by Gov. Arnold Schwarzenegger. "I think the governor wants to restore the economy," said state Assemblyman Isadore Hall II, D-Compton, the bill's author.

The proposed stadium will be located in the City of Walnut. I've never been there either. But it's smack in the middle of LA and Anaheim.

Now all they need is a team. According to Majestic Realty, talks with a number of teams will start up as soon as the season ends. On their short list are the Minnesota Vikings, Buffalo Bills, Jacksonville Jaguars, St. Louis Rams, San Diego Chargers, San Francisco 49ers and Oakland Raiders.

So who should move? Vote in the poll below, and if your choice isn't listed, post to the comments which team you'd relocate and why.