Daggumit! FSU Board of Trustees member shoots off his mouth about Bobby Bowden's future

Share All sharing options for: Daggumit! FSU Board of Trustees member shoots off his mouth about Bobby Bowden's future

Although this news is a week old, this blog is less than a week old so I wanted to comment on it...

A member of the Board of Trustees at Florida State publicly stated last week that he wants FSU Head Ball Coach Bobby Bowden to step down at seasons end. Not such a great PR move by the FSU BOT. Even though this is college football, it's still a business, and publicly stating that your legendary head coach should step down at the end of the year because you're frustrated of mediocre football isn't a good front office move in any way, shape or form. 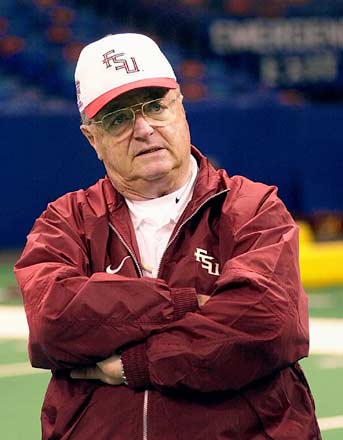 Bobby had "nothing to say" about the BOT comments
via internetservices.readingeagle.com

While it's apparent to all that Bobby wants to regain the all time victories lead from JoePa, the reality of the situation is that Penn State is a stable, winning program right now, and Florida State is a declining mess. Every year that Bowden stays, the program seems to get worse. Being a Penn State alum and a student during the worst 5 year stretch in Penn State history (I stayed an extra year - don't hate!), I can tell you first hand that seeing your legendary coach take so much criticism is tough, and I, for one, want Bobby to be able to leave on his own terms much the way JoePa is doing right now.

To me, the biggest difference isn't necessarily losing football games, but more so the way Florida State is losing. They're getting humiliated! When Penn State was losing from '00-'04, they often found themselves 1 score away from tying or winning the game. They were close and JoePa knew it, and in 2005 he made everyone believe that they were, in fact, close to winning a lot of games during a 4-7 campaign in 2004. 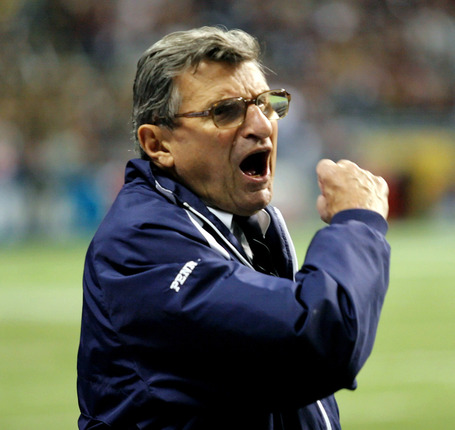 JoePa was able to turn around his fortunes at PSU. Can Bowden do the same at FSU?
via blog.pennlive.com

Florida State, and Bowden, aren't close to winning a lot of games. In fact, they're losing to ACC also-rans, Big East upstarts, SEC rivals, and very nearly FBS schools. That's what's causing such angst from the FSU faithful, including the BOT, especially when the Seminoles were so used to being a college football powerhouse for 14+ seasons in a row.

The right solution? Let Bowden have the next season and a half to rectify the situation and put head coach in waiting (who came up with that idiotic idea?) Jimbo Fisher in a position to take over a solid, rebuilding Florida State squad with some potential to be a player in the ACC in 2011 and beyond. Bowden may lose the wins war with Paterno (at this point, it seems almost like a foregone conclusion with the way the programs are going), but he can still do right by the program he helped build, and the school he loves so much. He deserves that much at least daggumit!