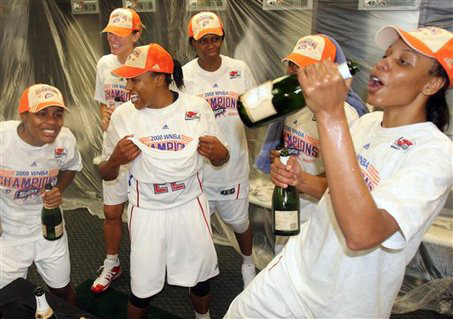 Don't call it a shocker, unless truly, you really are shocked by this news, but the WNBA team the Detroit Shock is about to pack their bags and head down to the city of Tulsa, Oklahoma. It was leaked this morning that the deal is done, but an official announcement has yet to be made.

If (and when) the Shock move to Tulsa, former Arkansas coach Nolan Richardson will take on the role of both coach and GM.

We here at Front Office Fans aren't huge WNBA groupies, but out of all the WNBA teams (of which there are what, like six?) we could probably name two. The Shock being one of them.

It seems like Tulsa will be a good fit for the Shock. It's a smaller town with a lot less professional and collegiate sports teams to compete with. Plus, bringing in Richardson as coach will probably draw some nearby fans from Arkansas. And while they seemed to be one of the marquee teams of the league, winning titles in 03, 06 and 08, their attendance was down and with the Detroit economy as it is, it wasn't heading back up any time soon. Furthermore, they never managed to steal enough fans away from the Tigers, Red Wings, Pistons and the very first WNFL team the Detroit Lions.

So here's to what's left of the Detroit Shock. It was fun while it lasted, but just like the Charlotte Sting, Cleveland Rockers, Houston Comets, Miami Sol, Orlando Miracle, Portland Fire and Utah Starzz, their time has come. See ya in Tulsa.