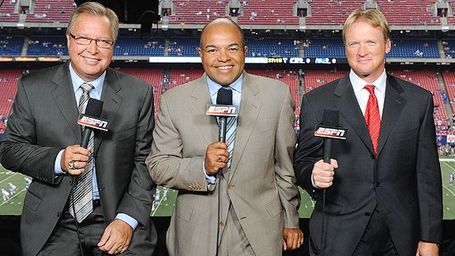 Watching Monday Night Football has becoming increasingly painful with both Ron Jaworski and Jon Gruden into the booth. Jaworski feels the need to turn every game into a painful, three hour telecast breaking down each team's quarterback play. This would be fine if he actually provided valid criticism or praise. Last night he felt the need to to blame all of the Redskins problems on quarterback Jason Campbell. While Campbell was certainly far from perfect, many of his problems on the night stemmed from the offensive line's inability to block anybody. Gruden even attempted to point this out on one occasion before Jaworski started yelling about the Eagles showing their blitz and that Campbell should have audibled at the line.

Actually Gruden trying to justify a player's mistake and pass blame off for them is nothing new from the rest of his tenure in the commentary booth. Gruden's obvious desire to return to the sidelines as a head coach seems to have him kissing every NFL's team ass during each Monday night telecast. His only negative comments yesterday concerned Redskins tight end, Fred Davis who he felt needed to do better in pass blocking. However he tempered all that by telling everybody watching how good Davis is as pass catcher. His monologue at the beginning of the game about how much talent the Redskins had would have convinced you we were watching the 80's Redskins.

The only thing worse than last night's performance was when Brett Favre and the Vikings were on Monday night. Both times Favre certainly performed very well, but Gruden and Jaworski sounded like a couple of teenage girls watching N'Sync perform with how they were fawning over Favre. I lost count of how many times we were subjected to hearing that Favre just plays the game like a kid and how much he loved the game. I'm going to assume what makes Favre an all-time great quarterback has nothing to do with the joy with which he plays the game. Not that I'm an expert or anything, but I would bet that there are a lot of players in the NFL that really enjoy playing the game.

It was even worse when Favre would make short passes that were converted into longer gains by the receivers and rather than talking about the run after the catch, we were shown how Favre was confidently moving in the pocket. They certianly were right in giving Favre plenty of attention for his play that night, but it would have been nice to hear some acknowledgment of the fact that there were 21 other players on the field at the same time as Favre.

Mike Tirico is the unfortunate third member of the crew who has done a commendable job with the play-by-play so far this year. Don't feel too bad for Tirico though, I'm sure when they finish up the telecast he tries to have some fun with the female producers of the show.