Earlier this week, "news" broke that former/future Yankee's scapegoat Alex Rodriguez has in his possession not one, but two paintings depicting him as a CENTAUR.  For those of you who missed the afternoon of 6th grade social studies class devoted to Greek Mythology, and haven't seen the recent Old Spice campaign, a centaur is some sort of a half man, half horse.  This begs the question, is he serious or is this some sort inside joke between him and his friends himself?  If he's serious, then the man has a level of narcissism that would rival any WWF wrestling villain of the late 80's (a commissioned self portrait of a mythological figure would make The Model Rick Martel blush.)  On the other hand,  if he's joking, A-Rod might just be a modern day Andy Kaufman. 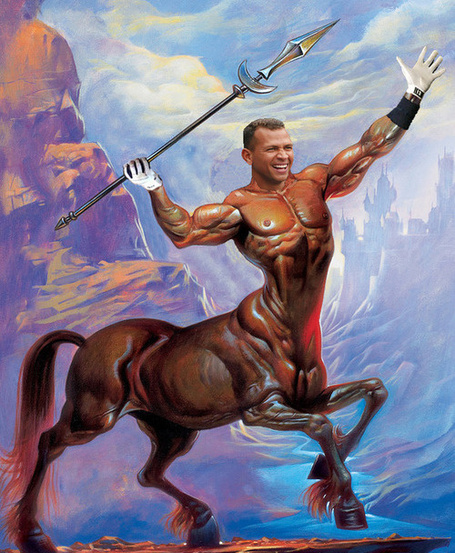 (This brilliant artists rendering is thanks to Jason Fry of http://faithandfear.blogharbor.com/)

Every Christmas since my wife and I have been together, I have requested that she buy me a painting depicting myself in some sort of unrealistically heroic situation.  Not because I am that vain, but because in my mind, the discomfort of others wondering if someone is serious is the highest form of comedy.  I can't think of anything more hilarious than an uncomfortable fancy dinner party in the shadows of a massive oil painting depicting the host shirtless atop an erupting volcano with the American flag in their grasp.

Below I make the case that Rodriguez cannot be the narcissistic robot he portrays to the public, but he is infact conducting a widespread Jamie Kennedy social experiment to entertain himself and laughing all the way to the bank.

The fact that A-Rod is dating Kate Hudson, lends credence to the idea that the guy is F-ing with us all, and laughing about it behind closed doors.  Two of Hudson's former boyfriends include Owen Wilson and Lance Armstrong, who seem like pretty normal guys, which makes it hard to believe that she would do a complete 180 and date someone as douche-y as A-Rod seems to be in public.  Both Armstrong and Wilson were considered pretty funny around the time they dated Hudson.  Lance being pretty funny in his Dodgeball cameo and as host of the ESPYS, while Wilson was spectacular in Wedding Crashers. After Hudson, Owen Wilson starred in Drillbit Taylor and Marley and me while people started stealing Lance's bike.

Take it from me, I'm a certified laugh riot, which is why Carlos Mencia and Wanda Sykes both want me dead.  It's also no secret  Derek Jeter is not an A-Rod Fan.  Make no mistake Jeter is cool (how cool?) Ice Cold, but  let'sface it, the Yanks Captain is no barrel of laughs.  The funniest thing Jeter has ever done is film a commercial for the Ford Edge, where Jeter...get this...pretends that he would be caught dead driving a Ford Edge.  (Note- This unintentional attempt at comedy was topped by Tiger Wood's borderline insulting endorsement of Buick.)

Exhibit C- Who the Hell Would Seriously Want to be a Half-Horse?

With the one obvious exception, the idea of beinga centaur seems inconvenient on every level.  Of all the things to be, both real or imagined, I can think of hundreds of things cooler than half-man/half-seabiscuit.  Shark, tiger, race-car or pogo stick would all be infinitely more awesome.