Being benched got you down?

Share All sharing options for: Being benched got you down? 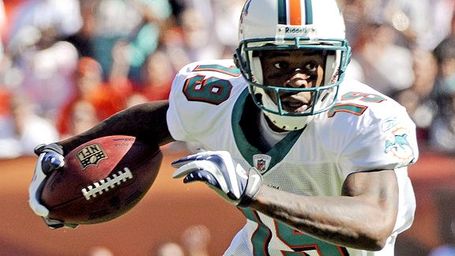 It's no secret that Ted Ginn Jr. has been an NFL letdown. In three years since being drafted #9 overall out of Ohio State, he's done next to nothing to help the Miami Dolphins. Everyone expected him to be the next Mark Duper, but he normally looks more like Yatil Green. And for a starter and first round pick, that's just unacceptable, and downright embarrassing.

So finally this week he was demoted. Team coaches took him out of his starting role and told him to "get better." Yeah, that's always a good sign. He was told he'd be on special teams and rookie Brian Hartline would take his starting spot.

But instead of riding the bench and hoping someone would break a leg, Ginn stepped up to the plate. Big time. Finally. By returning kickoffs of 100 and 101 yards for scores. And according to ESPN, he also became the first player since 1967 to return two kickoffs for touchdowns in the same quarter since Green Bay's Travis Williams. Not too shabby for a guy coming off the bench.

According to Wikipedia, "Ginn has admitted that he has a learning disability, and it takes him two to three times longer to learn something than most others." Here's hoping he's finally learned how to score.