So, earlier today a certain infrequent contributor to this blog was making the early rounds of his fantasy football squads hoping someone got Tuesday drunk and dropped Calvin Johnson, when he came across a tiny clerical error, which referred to Texans WR as the Astros WR.  This blogger was so tickled by the minor mistake (and eager to use his new Chrome screen-cap extension) that it prompted him to post his first piece in months.  In his haste to get this (admittedly, not hilarious) nugget to press, the blogger made the EXACT SAME MISTAKE as the one he was about to ridicule.  This blogger somehow confused D-Backs outfielder (and fantasy bargain) Chris Young for being a member of the Houston Astros.  Kudos to frequent commenter for Gobroks for pointing out the mistake...and since fair is fair, I have posted a screen-cap of mythis idiot bloggers previous post making fun of a screen-cap.  Did I mention that this is my first time harnessing screen-cap technology? 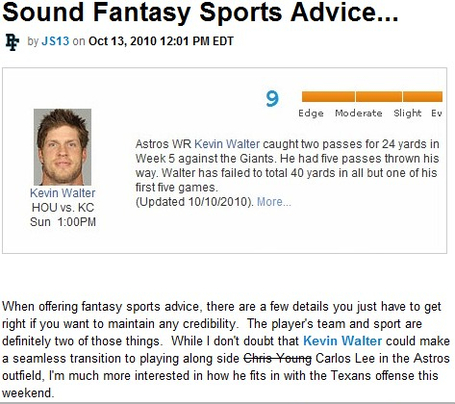