Share All sharing options for: 3/1/10 - Back To Boring Boxing

Ed. Note: Our Weekly Picks to kick off March have a single tie that binds, which is the corporate rental apartment building in LA that we call homebase for Project Franchise.

Boxing Boredom - Before every big fight Manny Pacquiao loads up his entire entourage in Manila and flies them out to LA where he trains at Freddie Roach's Hollywood boxing mecca "The Wild Card". This is probably the 4th or 5th fight that Manny and his crew have spent living in our building, so we've gotten pretty used to seeing the HBO camera crew around the complex or members of the entourage dressed in hoodies, sweating it out in the sauna as they try to win the prize for "making weight" alongside the champ. On the lead-up show 24/7 they always show the hoopla surrounding a big-time Pacquiao fight and get us all types of jazzed before the main event, when his big ass van with his face on the side pulls up out front and the oversized posse loads up for the ride to Vegas. There is usually a bit of a buzz around his team and you get a sense that something big is about to go down.

But not this time. Not at all. I was in the business center today getting a fax and didn't even notice that his business manager was next to me and I hardly noticed. I realized when I got back to my desk that I didn't even know who he was fighting... but I can definitely tell you who he's not fighting. The fact that the sport of boxing lacks any type of leadership that was able to step in force Manny & Floyd to come together and agree to the testing terms and get a fight on the card is a travesty for fans. The only hope is that they both win - Floyd against Sugar Shane, and apparently Pacquiao against some guy named Joshua Clottey - and that the next time Manny's crew comes to town they are here to train for the best fight of this young century. 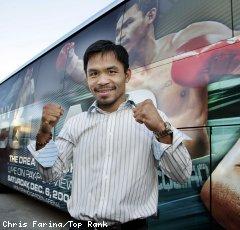 Usually when this bus pulls up we get excited - I doubt we'll even notice this time.