Ed. Note: Our Weekly Picks to kick off March have a single tie that binds, which is the corporate rental apartment building in LA that we call homebase for Project Franchise.

Dancing With The Stars: Along with Team Manny, our building also regularly plays host to the cast of ABC's DWTS. Not everyone lives here - usually its just the pro dancers and the celebs who aren't rich enough to already have an LA mansion (meaning we're gonna get Shannon Doherty, not Pamela Anderson) - but we always get a few good sightings during the season, as they tend to spend a lot of time in the gym or hanging poolside. Of course having a slew of hot dancer chicks in the building (they tend to be here year round) is obviously a good thing, but the new crop of dancers have us more excited than ever. See by the time Jerry Rice and Emmit Smith did the show, they were too famous and had made too much money to bother living in a free corporate rental - but we're not convinced Ocho Cinco is above the handout. In fact, we're quite certain he will be all for being our new BFF. In addition to Ocho, we're also looking forward to Erin Andrews taking up residence down the hall - but we will be putting tape over our peep hole, just in case there is a case of mistaken identity. And while we wouldn't normally be too excited about a male figure skater being out new neighbor, this Evan Lysacek is fresh off the gold and the past Olympians who have lived nearby (Shawn Johnson & Kristi Yamaguchi) both did pretty well on the show, so we've got to expect him to be an early favorite.

The show is definitely targeted to 55+ woman and not really in our wheelhouse, but it has become a runaway success and they have consistently gotten better and better celebrities, which is a great thing for the fans - and with Chad in the show this season (and hopefully hanging out on our couch), we may have to start watching. 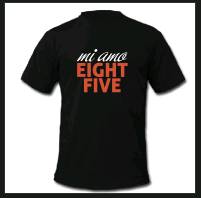 With all this Ocho Cinco hype, we've designed a new t-shirt for our soon to launch line of "Fan Fits" - you can check them out at our just released online store @ http://projectfranchise.spreadshirt.com/