Ben Roethlisberger - After a whole lot of rumors and speculation, the Ocmulgee County, George DA announced today that he would not be pressing charges against Big Ben for the apparently strange sexual activity that went down in "Da Club" with a sorority girl about a month ago. While it must have definitely come as a weight off of the QB's shoulders, the way this has all played out he is still coming across as a "dirt-bag" who was up to no good - and it seems like that label won't be leaving him anytime soon. 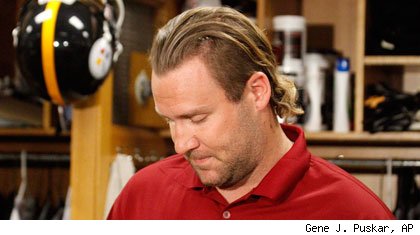 To further the point that he is a total idiot, Big Ben broke out one of the worst "undercuts" seen in a decade

As a follow up to the DA's announcement - where they detailed his creepy encounter where he had a bodyguard bring some hammered co-ed to a small bathroom of a sh*t-hole country "club" (and I don't mean the kind where they play golf) so he could get his Tiger on -  Big Ben held a press conference where he basically mumbled out some weak apology to his family and friends and then looked like he was ready to get back to business... and by "business" I mean getting hammered and chasing skirts, because he's got 5 more months before the 2010 NFL season.

Roethlisberger has been a very good - not great - pro QB  since his rookie year and has brought a pair of titles to Pittsburgh. However the Steelers tanked down the stretch last season and, just yesterday, traded away Ben's second favorite WR target Santonio Holmes (who had some recent off-field troubles of his own) to the Jets for just  a 5th round pick. But his handling of this whole situation, coupled with the previous incident in Lake Tahoe, has to have left fans questioning the guy who is the face of their franchise and the leader of their team during what looks to be a very pivotal upcoming season for the beloved organization.