Hey Phil, There's a Reason Why Durant Shoots So Many Free Throws

Share All sharing options for: Hey Phil, There's a Reason Why Durant Shoots So Many Free Throws

It's a simple mantra that you hear echoed countless times by coaches, players, broadcasters, writers and bloggers throughout the course of an NBA season: Attack the rim and good things will happen.  Shots at or around the rim are high percentage opportunities and also generate more contact which often rewards the offensive player with free throws.

"Yeah, by the calls he gets, he really gets to the line a lot, I'll tell ya," Jackson said Tuesday. "There's a couple plays in the last game where I was pretty curious how he got there."

Reading this I started laughing.  Phil Jackson has been watching Kobe Bryant for the better part of 10 seasons with the best seat in the house on the Lakers bench.  You would think nobody would understand better than him the reason why the Thunder's Kevin Durant has averaged around the same number of free throw attempts in this, his third season, as Kobe Bryant had in his most prolific scoring season  in which he averaged a career high 35.4 points per game.

Let's take a look closer at Kobe's 2005-06 seasons in which he attempted a career high 10.2 free throws a game and Durant's current season.

Durant this season has shot 47.6% from the field, identical to what he shot from the field last year.  So how has he increased his scoring average by nearly 5 points (4.8 to be exact) while only averaging 1.5 more shots per game?

Thanks to NBA.com's hot spots page, we can track how a player shoots from specific parts of the floor throughout the course of a season.  Comparing Durant's numbers from last season to this season one thing is apparent.  He is shooting at the rim or from 15 feet and in more consistently and is converting more of his opportunities from those zones. 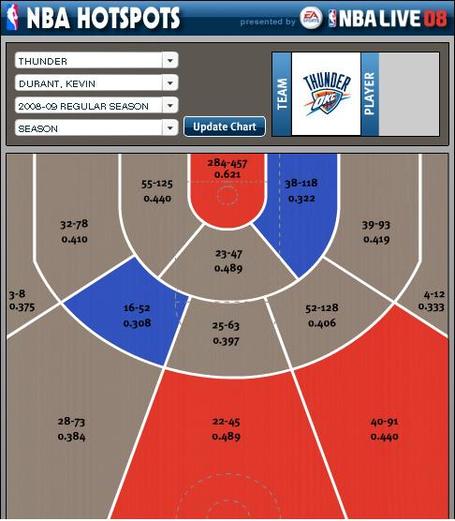 This season Durant shot 334-513, completing 65.1% of his attempts at the rim.  This season on attempts from 15 feet and in he shot 180-405, completing 44.4% of those attempts.  The difference is staggering in that he hasn't just attempted more shots from each zone, but how much his shooting percentage increased in both areas. 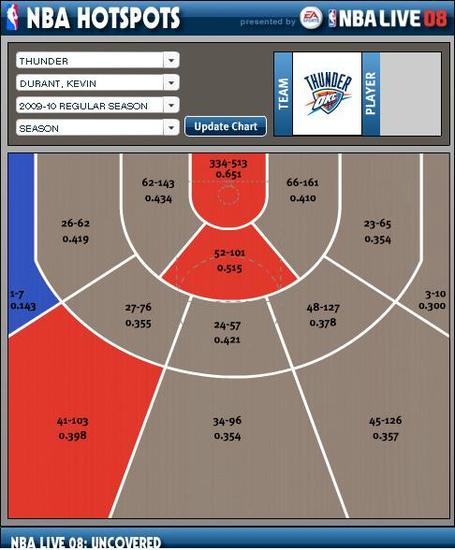 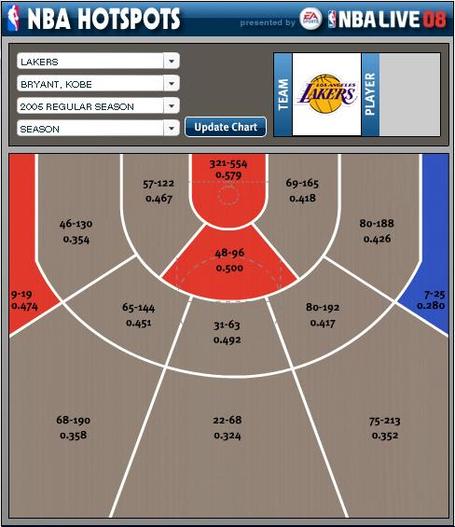 Looking at those numbers in comparison to Durant's current season the numbers are similar in attempts with Bryant attempting 20 more shots from both zones combined than Durant.  From 2004-2006 Bryant averaged a little above 10 free throw attempts per game and it was because of his decision to drive to the rim while also being the first time in his career he carried the offensive load with Shaq's departure.

Even during that period though, Kobe was never as efficient a scorer as Durant is today.  His highest True Shooting Percentage mark was 58.0% whereas Durant this season posted 60.7% mark.  That's because of the number of jump shots from 16-23 feet he attempted.  For example in that season Bryant attempted 717 shots from that range posting a 42.1% mark, whereas this year Durant has only attempted 387 shots from that range at a 38.2% clip.

What is interesting is that in the two season following his 2005-06 season, Bryant decreased his attempts from 15 feet and in, maintained the frequency with which he attacked the rim and increased his attempts from the 16-23 foot range and behind the three point line.  However in his last two seasons while he has not drove to the rim nearly as often, he has shown a renewed commitment in attempting more shots from the 15 feet and in range.

Phil Jackson's almost sarcastic reaction can be expected before a playoff series as he begins to play mind games with the officials.  However if he just took a closer look at the numbers of the Hall of Famer on his own team he'd have a better idea as to why Durant got to the line with such regularity this season.

As for the questionable calls Durant gets, Phil shouldn't complain too much considering some of the questionable calls players he's coached like Kobe, Shaq and specifically Jordan received over the years under his watch.  It's called the superstar treatment and for better or worse, it has always been a part of the NBA game.

Players like Durant, LeBron, Wade and Howard lead the league in free throw attempts like Bryant once did and that's because of their ability and willingness to get to the rim.