Solving Barcelona - if I was Arsene Wenger

Share All sharing options for: Solving Barcelona - if I was Arsene Wenger

The first leg of the Champions League clash at the Emirates Stadium was phenomenal. Barca were at the mercy Manuel Almunia’s stellar string of saves early on and eventually went up 2-0 early in the second half. After going a man down, however, Barca lost their well-earned lead and ended up with a 2-2 draw.

With the second leg being played at the Camp Nou, Arsenal will be the underdogs.

Given that they have a lot of work to do, I’ve decided to lend the Gunners my extensive video game and couch-earned managerial expertise.

If Arsenal want to win, here’s what I believe they need to do - after the jump.

Break up Barca’s passing in midfield

I’m not exactly shocking the football world by declaring that Barca dominates the midfield with their passing. So if everyone knows they do, and we’re all aware that it’s the source of their power, than the search for the midfield passing kryptonite needs to be found.

Unfortunately for the Gunners, it looks like Alex Song, their designated midfield destroyer, will miss the match due to injury. That said, they still have several other options. Mainly, they need to press and they need to collapse on central midfield. This may mean giving up some attacking presence high up the field, but ensuring that Barca must work hard to maintain possession in the middle.

Defend down the left and attack down the right

If Barcelona use their typical 4-3-3 formation, they have the deadly combination of Lionel Messi and Dani Alves surging up the right side, meaning the left side of the defense.

For Arsenal to ensure they are not overwhelmed, they may have to sit deeper on the left side, and frequently lend help to that side of the pitch.

Conversely, if Arsenal are to create goals, they’ll need to get Walcott behind Maxwell or Abidal, and have Sagna join the fray on overlapping runs when Walcott cuts inside.

Play a possession game, but not along the back line

One of the defining features of Barca’s great start in the first leg was their ability to press high up the pitch. The press created turnovers and effectively stifled Arsenal from spreading the ball out wide to their full-backs.

When the Gunners get the ball, they need to find a midfielder with it immediately. Barca were not as adept in the second level, given that they frequently committed 4 players to pressing the back line. If Arsenal can get a quick first pass into their primary ball distributors like Denilson, Diaby or Nasri, they should have a chance to control possession for longer spells.

Both teams have a variety of their starters either injured or suspended for the game.

Barcelona will be without both central defensive starters, Carlos Puyol and Gerard Pique. They will also likely be without Zlatan Ibrahimovic, Andres Iniesta and probably Yaya Toure as well.

Arsenal will be without Alex Song in midfield and William Gallas on defense. More importantly, they will be without their best two offensive players in captain Cesc Fabregas and Andrei Arshavin. 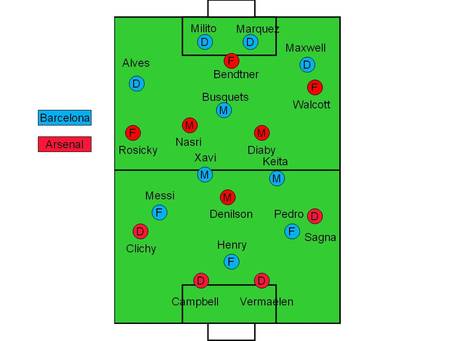 The Gunners will need to deploy Bendtner and Walcott high up the pitch. Bendtner can be a very good passer to a cutting winger, so the two of them will need to link up on the counter to open up space for the midfielders.

Rosicky is quite good defensively for a winger, and may need to tuck into midfield at times to help maintain possession or clog the midfield in defense. Nasri has been much better in central midfield this season than on the wing, but could easily interchange with Rosicky on offense depending on who is given more room to operate.

Diaby and Denilson will be the key for Arsenal. They can’t be expected to dispossess Xavi and Keita at every turn, but they need to close them down and give them very little time on the ball.

Denilson will also need to be the one to initiate the offense. He is extremely adept at getting the ball to his creative players, so should be the first look for the defense if they win the ball.

With Sol Campbell in at center back, the Gunners would be best to force attackers wide and let them cross it, rather than allow them to cut to the middle.

I may be one of the only people who believes that Arsenal have a shot. That said, without their best players, they would need to play a perfect game to pull off the upset.

The likely score in my books is 2-1 for Barcelona.