Grant Whybark - Not surprisingly I usually automatically side on the team of anyone with the same given name as me, but in this case its required me really thinking about it. If you haven't heard the story, this Whybark (a ridiculously silly last name that would have elicited an decades long game of "Why bark?" akin to "You know how I know your gay?" if he was my buddy as a child) guy is a golfer at University of St Francis (in Illinois) who had already won their conference title, and who had also already individually already qualified for the NAIA national championship, when he stepped up to the first playoff hole of their conference tourney last week. He "intentionally" put his drive in the shrubs and made a double bogey, allowing fellow competitor Seth Doran to win the individual title and secure his own spot in the national championship. The way that the rules played out, Doran's addition to the national championship tourney didn't displace anyone else and it didn't effect Whybark's team, so it really was just a gracious gesture from one athlete to another - who he seems to have honestly believed that his fellow competitor was deserving of the spot. I'm still a bit torn on the idea of "throwing" a golf hole - but in this case, where there are no losers other than himself, and just one great winner it does seem like a very selfless act of a player who was just "hooking up" his buddy and that I'm totally cool with. When Project Franchise get's our own squad we would never suggest our players throw a game, but I think a free beer or an extra packet of nacho cheese for our buddies seems like a good idea. 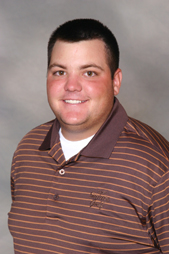 I may have chosen a different angle