First Rule of Fandom - Wait for the Fat Lady to Sing

Share All sharing options for: First Rule of Fandom - Wait for the Fat Lady to Sing

For starters I'd like to declare that I am a Golden State fan - I grew up in the Bay Area and we regularly had season tickets, and to this day my old man still watches 60+ Warriors games each season on TV (despite not living in the Bay anymore). However, and I'm a bit ashamed to admit this publicly, for most of the last decade I've lived in LA and have become a surrogate Lakers fan.

I used to hate Kobe, even rooting for the Nets in the 2002 Finals (they did have Oaktown local Jason Kidd at the point), and, as a NorCal native, have been trained to despise all things SoCal sports related. I will never root for the Dodgers (I'm a Giants fan), or even the Angels, but somehow 'Showtime' has sucked me in. I think its a combination of factors - the fact that the Warriors have won 1 playoff series in the last 10 years, that the Lakers have been so dominant in the West and that this really is a Laker town where its just more fun to be out and about in LA when they are winning. This is really just a background to the story of a funny fan experience I had last night, where I was playing the role of 'Laker Fanatic' (which is a bit of a stretch on my level of purple & gold fandom)... 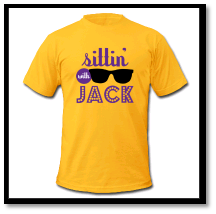 Shameless PF Promo: the Fan Fits T-shirt we've created for the Lakers playoff run is pretty sweet, get one here!

Last night, I got a text from my sister-in-law who recently graduated from ASU nursing school (and is not even close to being any part sports fan), and now considers herself a Phoenix local asking "R u rooting for Lakers or Suns?". I replied by explaining that I am rooting for the Lakers, but mostly because I'm interested in seeing an exciting finals and I think that Lakers-Celtics match-up provides the best opportunity for that. She then followed up with some text about how I should "Root for the underdog" - implying that she was doing some early evening drinking (which is pretty much a guarantee if you're awake at ASU). This was the end of our discussion until about two hours later when the real fan mis-step occured in the following sequence:

Game Note - JRich banks in a 3 to tie the game with 3.5 seconds left

Text Received - "Ok I eat my words a lot"

a) Never talk smack until the game is over. As tempting as it can be to gloat when things are going good, there is no reason to start jabbering until you know its wrapped up.

b) Nurse's tend to curse a lot.

I myself learned the first lesson during my freshman year at Miami - in an early season night game at the OB that featured more rain than I had ever seen, the unranked U took a shocking late game lead over then #1 Penn State and 70,000 Canes fans began chanting "Over-rated". With about a minute to play, Mike Rumph slipped and fell in man-coverage and got burned for an 80 yard TD giving the Nittany Lions back the lead and eventually the win. It was one of the lowest low's I'd ever felt as a sports fan and it taught me not to start with the smack talk until the fat lady had sang.

When Project Franchise gets its squad, its going to be very tough for me to contain my excitement at our first win, first championship, etc - but I have learned my lesson and hopefully will keep it bottled up until the final pitch has been thrown... and then its fair game!