Share All sharing options for: Blue Jays Doing Right By Their Fans

But there’s a bigger picture, too. As much fun as it can be to cheer for the comeback victory or applaud the savvy free agent signing, these ultimately aren’t the things that make fandom. For every argument over which players should start and which should sit, there’s a fan out there just happy to watch them play. For every debate over how much money a player should be re-signed for, there’s a fan just excited to put their jersey back on and cheer their name.

Ultimately, it’s those relationships that make being a sports fan so rewarding. For every heartbreaking loss or free agent exit, the bonds fans sometimes share with their team make the agony they put themselves through all well worth it. Those days when grown men shed tears over championship wins or a long-time hero being enshrined in a hall of fame don’t just come over night.

The Toronto Blue Jays seem to be one team that clearly understands this.

Revisiting a strategy from the team's heyday in the early 1990s, key members of the Blue Jays have embarked on a Winter Tour, which will involve them taking a tour bus across Canada to spend time with young fans. Still in the early stages of the tour, the team has already visited a number of elementary schools in the Toronto area, and this week traveled to Kitchener/Waterloo (home of Blackberry-makers Research in Motion) making stops at more schools, including the world-renowned Wilfrid Laurier University (Note: This writer may be expressing significant bias.)

Extreme homerism aside, the Blue Jays are taking strong efforts to re-spark their base. Despite operating like a mid-market team in recent years, as the only Canadian baseball team, the Jays have an incredibly vast resource of potential fans, the likes of which helped the team earn back-to-back World Series trophies in 1992 and 1993. While I can't claim to have much recollection of this, the rumor is that the Jays support in Toronto and surrounding areas at that time was even stronger than it was for the beloved Maple Leafs - as improbable as that may sound.

And while fans of the team express frustration over having to watch Edwin Encarnacion as the team's full-time designated hitter in 2011 or lack of a suitable closer, there are other fans getting close-up with the stars of the team that they'll be cheering on for years to come. 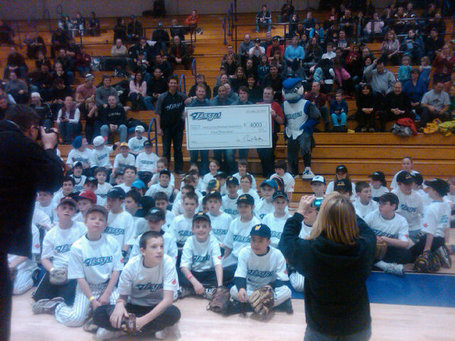 In a country where baseball is often overlooked and hockey, the national pastime, dominates the headlines, it's these fans that are going to remember Vernon Wells, Jesse Litsch, and Travis Snider spending time with them far more than they'll remember any of this offseason's minute details.

It's often said that the best way to build a sports team is by investing in the future. Whether that comes with throwing money in a farm system or giving time to the next generation of sports fans, I certainly think the Blue Jays are on the right track.